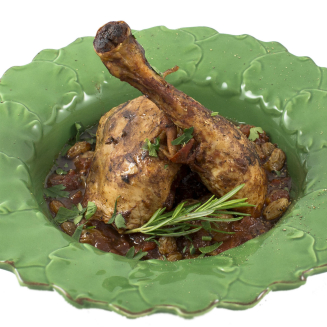 First prepare the meat. Wash chicken well and cut into pieces. Braise at low heat with some olive oil and onion. When golden brown, add the cognac, ignite with a lighter and return to heat (flambéing). Shake until flames go out. Season with salt and pepper. Chop half the tomatoes into small cubes and grate the rest.  Add both in the pot. Add balsamic vinegar, half the currants, and cinnamon. Cover the pot with its lid. Let it simmer at low heat for about 20 minutes. Serve with tubular spaghetti and mizithra cheese.

Chicken meat is an important source of high biological value protein, iron, phosphorus and magnesium and contains B-complex vitamins, such as B12. Chicken is a healthier alternative to red meat. According to the Mediterranean Diet Pyramid, up to 4 servings of chicken can be consumed per week. Compared to other types of meat, chicken is a better option as it has the lowest content in total and saturated fat. Furthermore, currants consist a good source of antioxidant substances.

This particular recipe was a favorite winter dish for the Messinian people after hard work in the fields.