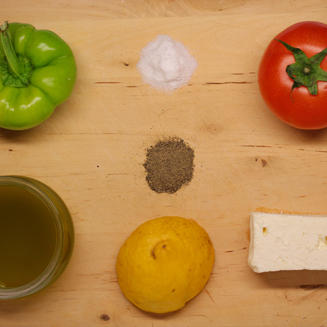 Prepare the dough for the filo pastry in a mixing bowl by adding 750 g flour, 1 wine glass of olive oil from Messinia, 1 teaspoon of salt and lukewarm water. The dough should be firm so you can roll the dough into thin sheets. Grate the pumpkin and place it in a colander to strain for a couple of hours. Then squeeze any remaining liquid with your hands. Alternatively, you can place the pumpkin in the colander and then in the refrigerator and leave it for 12 hours to strain completely. Finely chop all the vegetables. In a deep frying pan pour some olive oil and sauté the vegetables. Then add the well-strained pumpkin and remove from heat. Add the cheese, salt, breadcrumbs and finally the eggs. Combine well and cover. Roll out the dough into sheets. One-by-one place the first 4 sheets on a greased baking dish having brushed some olive oil on the surface of each. Pour the filling and spread it out evenly using a spatula. Place the rest of the sheets on top, again by brushing each one with olive oil first. Using a sharp knife score the pie into square or diamond-shaped pieces. Brush some olive oil all over the top of the pie and place in the oven. Bake at about 180 o C for approximately 1 hour.

This pie is high in complex carbohydrates, fiber, a number of vitamins, such as B-complex vitamins, and trace elements, such as manganese. Pumpkin, the main ingredient, increases the antioxidant value of the dish, while walnuts and almonds increase the levels of monounsaturated and polyunsaturated fatty acids. The addition of feta cheese increases the levels of calcium and animal protein.

Yellow pumpkins were grown in home gardens during summer for cooking and baking. They were placed on balconies and in winter they were used to make sweet and savory pumpkin pies. Often the pumpkins were so large, households would share them with their neighbors, as there was no other way to preserve them. Sweet pumpkin pie was usually made during the period of Lent before Christmas and Easter