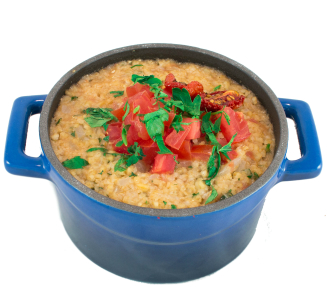 Pour the olive oil into a pan and let it heat. Add a large glass of sour trahana. Sauté until it turns golden brown and add the chopped onion. Stir the ingredients a couple of times and carefully add lukewarm water and the chopped tomato. Continue stirring and adding more lukewarm water, since it is absorbed very quickly. Add the parsley, and, when the mixture turns soft, in approximately 15 to 20 minutes, add salt and pepper and remove from heat. The mixture should not be very thick.  Cover the pan, making sure some liquid remains. Serve at least 30 minutes after removing from heat so that the liquid can be absorbed as the trahana increases in size. When served, the dish should be creamy enough to be eaten with a fork. Fried trahana can be accompanied by grated mizithra, sfela or feta cheese.

The dish is rich in complex carbohydrates, fiber and various vitamins including vitamins B complex, which are responsible to a great extent for the development of the human body. It also contains large amounts of minerals and trace elements such as manganese.