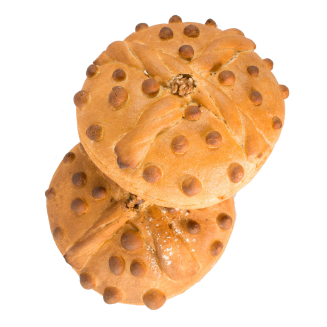 In a deep bowl, dissolve yeast in lukewarm (not hot) water. While mixing add some flour. Use the same technique, if using sourdough starter. Cover and let it rise in a warm location. When starter is nearly ready, in a saucepan add 3 glasses of water and boil cinnamon. Drain water after 10 minutes. There should be about 2 or 2 ½ glasses of water left after boiling. In this water dissolve sugar and let it cool down until lukewarm. Heat olive oil in a frying pan until very hot. Remove from heat and let it cool down until it is lukewarm. Sift flour in a large mixing bowl, make a well in the center of the flour and pour lukewarm olive oil. Mix and rub flour with both hands so that flour has thoroughly combined with the olive oil. Again make a well in the center of the mixture and add sourdough starter. Add also some of the cinnamon water and mix until sourdough starter has dissolved. Knead using both hands.  Add orange juice and cinnamon water while kneading. If dough is too firm, add some lukewarm water. If it is too sticky or watery, add some flour and knead. The dough should be firmer than ordinary bread dough. Cover the bowl with the dough using a clean kitchen towel and prepare the baking dishes. Grease baking dishes with olive oil and keep warm in a preheated oven.

Cut a piece of the dough and mold on a wooden table or surface sprinkling sesame seeds freely. Create different round shapes.

The distinctive feature of Christmas bread is that it is often decorated with pieces of dough formed into a cross or "X” like the one in the photo. Place the Christmas breads in a baking dish far enough apart so they do not touch because they will almost double in size. Cover the baking dish and place in a warm location until breads rise. When doubled in size, place breads in a preheated oven (200oC). Brush the breads with egg white beaten with a little water. Punch 3-4 holes in each bread and bake. If breads have turned golden brown, reduce oven temperature to 150-180oC. Bake for 45 minutes.

Christmas bread is rich in complex carbohydrates, fiber, a number of vitamins such as vitamins B-complex and trace elements such as manganese. The addition of extra virgin olive oil increases significantly their nutritional value.

On Christmas Eve women from the village of Aetos and the villages from the Kontovouni area would knead and bake Christmas breads (Christokouloures). They would prepare many because they wanted to offer them to their children, parents, nephews and nieces and neighbors. They would also make more intricately decorated ones for their godchildren who full of anticipation would wait for their treat. On Christmas day, families would exchange Christmas breads with their relatives, friends and neighbors. If the household could afford it, they would offer gift baskets containing besides the Christmas bread, sweets such as diples, kourambiedes and melomakarona. Christmas breads came in a variety of shapes and sizes. They were crispy and tasty, usually accompanying a breakfast beverage. A small Christmas bread took its place near the family icons, an offering to young Jesus and would remain there until the following Christmas.

• a pinch of salt for the dough